Bilateral mastectomy (commonly referred to as top surgery) – Is the surgical removal of both breasts. This is commonly one of the first surgical priorities for trans men and can be an inaugural step of their transition. The surgery itself is a pretty basic one; you are simply removing the excess breast tissue so that the chest looks nearly identical to a cis guy. One of the biggest differences of this surgery from a traditional bilateral mastectomy is removing cancer and is frequently more invasive, removing the nipple. 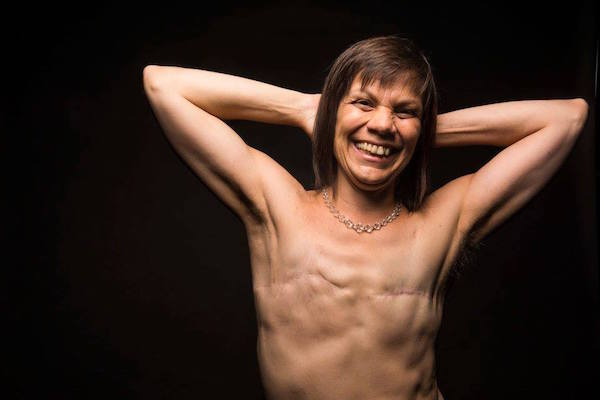 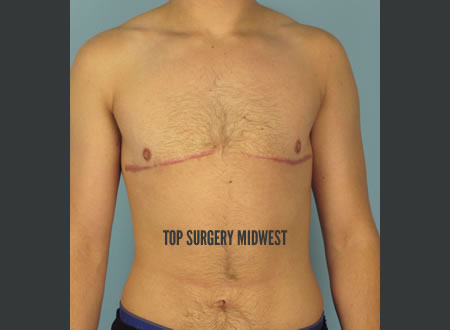 As you can tell from above, the incision is done at a lower point of the breast for trans men to maintain the more conventional look of a male chest. The price of top surgery can range from $3,500 – 9,000 USD. Fortunately, since this procedure is becoming more recognized as medically necessary, more and more insurance agencies extend coverage to this procedure. Recovery is usually around a week or two before you are back in normal condition. The fading of scars can take much longer than that, some taking many years to fade completely. Therapist notes/referrals are almost always required for this procedure; however, it is usually only required once. A common rule of thumb is that top surgeries take one therapist note while bottom surgeries can take two or three. Overall, this surgery can be an incredibly important step in someone’s transition and is medically necessary for their health and safety

Metoidioplasty – is the surgical extension of the clitoris to create a neophallus or a “new penis.” This can be done in conjunction with a scrotoplasty, the formation of a scrotum, which can also include testicle prosthetics. On top of this, the introduction of testosterone will cause the growth of the clitoris. The idea of a metoidioplasty is to extend the existing enlarged clitoris into a full-sized penis. Some trans men may choose this option over a phalloplasty because of the less-invasive nature of the procedure, the ability to get erect without assistance, and a lowered risk of loss of sensation. However, many trans men will choose to start with a metoidioplasty and then follow this with a phalloplasty. You are not limited to only getting one of these procedures. For trans men who are more interested in size, a phalloplasty might be a perfect fit. Possible size ranges from 3-8 cm, with an average of around 4-5 cm.

Recovery can be long and strenuous. You will be able to walk around after about a week; however, you more than likely won’t be able to resume standard activity for about 6 weeks. To fully recover, it can take up to a year and a half. It is also common to have a hysterectomy, the surgical removal of the uterus, an oophorectomy, the surgical removal of the ovaries, a vaginectomy, the surgical removal and closing of the vagina, and a urethroplasty, the surgical lengthening of the urethra. The price point is reliant on what you are having additionally along with your metoidioplasty, but the price tends to be around $6,000 – 40,000 USD. You will be required to have at least one therapist/doctor notes to go through with this procedure, if not two or three. Just like a vaginoplasty is for trans girls, a metoidioplasty can be the last hurdle in your transition and be an incredibly important step in their journey.

Phalloplasty – is the surgical construction or reconstruction of a penis. Like many of the surgeries listed, a phalloplasty was created for cis men who lost their penis in accidents or war. In 1946 the first phalloplasty was performed on a man by Harold Gillies, an otolaryngologist considered one of the founding fathers of plastic surgery.

This surgery can also be done in conjunction with a scrotoplasty, but some choose to do the process in stages. In this surgery, the surgeon will harvest and sculpt a phallus out of a skin taken from your forearm or thigh. Once a skin graft is harvested, the surgeon constructs the phallus and then surgically attaches it to the patient. The clitoris is usually left at the base of the penis to ensure the ability to have stimulation. You can also get an erectile device at the same time to assure the ability to have an erection. Similarly to a metoidioplasty, the price is very dependent on what you have done and which type of skin graft you choose to use. The price goes from $20,000 – 50,000 USD and can even get as high as $100,000 – 150,000 USD. Not to mention that some trans guys prefer to do the process in stages, driving the price up even more.

The two main places the skin graft is harvested from is the forearm and thigh. These are called RFF (radial forearm flap) and ATL (anterolateral thigh flap) phalloplasties. Recovery time is comparable to the metoidioplasty, as you will be walking after about a week and returning to work at about 6-8 weeks unless your work requires strenuous activity. You will also be required to have anywhere between one to three notes from a therapist or doctor to be cleared for the procedure.  Just like a vaginoplasty for trans girls, a phalloplasty can be the last hurdle in your transition and be an incredibly important step in their journey.

Hysterectomy – The surgical removal of the uterus. On this list, a hysterectomy has been referenced with getting it done with other surgeries; however, some opt into getting a hysterectomy done independently. There are many different types of Hysterectomy, such as a total, subtotal, and radical. For trans men who experience dysphoria over the potential of pregnancy, this can be a great option.

The most comprehensive hysterectomy is a radical hysterectomy, where they take out the uterus, ovaries, fallopian tubes, the upper part of the vagina, and associated pelvic ligaments. A hysterectomy and or oophorectomy being done on its own is a common surgical procedure. One of the things that makes it so common is how affordable it is. The price tends to be around 3,000 – 8,000 USD and can be covered by insurance. Full recovery may take around 6-8 weeks, and scarring and incisions are minimal.

Whether you need a therapist note or not is heavily based on where you are going; however, if you want to get it covered by insurance, you will need to show a diagnosis of gender dysphoria and get a therapist or doctor’s note for a referral. A hysterectomy and oophorectomy are both very common and fantastic first or final steps for trans men to feel more comfortable with themselves and their bodies.

Linked below is a fantastic website for trans men. I would highly suggest you look into it if you are interested in more information about this topic.